In last month’s newsletter, I started talking about a series of anchors that I’m hoping will help you navigate a very complex culture. Lately, I hear more and more from “church” people about perceived persecution and how we need to band together to stop it. Our rights are being trampled and true

Jesus-followers are increasingly in the minority. I get it; but I’m not sure that, biblically, we have a mandate to stop or avoid persecution. Now, I’m not talking about defending the defenseless or bringing justice where there is none, I’m talking about what the world demands of us because of our faith in Jesus.

In John 15:18-21, the apostle remembers the words of Jesus about the world. If the world hates us or is against us, we don’t need to fear because it is responding to us the same way it responded to Jesus. In fact, persecution for looking like Jesus is a sort of confirmation that transformation is happening. Here are some things that we need to remember as we see persecution increase because of the threat that transformation in Christ presents to the world.

Persecution is what Christians will face in this fallen world. Jesus promised (did you get that? PROMISED) not only that we would not be exempt from persecution, but also that it would be evidence of our belonging to Him! We should not be taken aback or off guard when we face persecution because it is part of the Christian worldview. Do you know who should be surprised at persecution? Muslims. Why? Because their religion is about dominating the culture and bringing their brand of “peace” and order to it. Nowhere are we called in Scripture to “dominate” culture. The Bible specifically calls us to influence culture but acknowledges that there will be neither peace nor order until the return of Christ. Here in the western world, we tend to think that persecution is infrequent. The biblical reality is that some Christians may not face persecution, but that experience is the exception, not the norm.

Government is never all it should be. In Romans 13:1, Paul says that we should be subject to our governing authorities and that those authorities have been instituted by God. What he does NOT say is that those governments will always (if ever) live up to God’s standards. If you remember our study of Daniel, we learned that when authorities recognize the image of God in them, they rule on God’s behalf; but when they rebel and make themselves gods, they become beasts (Daniel 4). While we are called to pray for our leaders and we, here in the United States, have a stewardship to vote, we cannot expect that our public authorities will be on the side of good and right. Sin runs deep and has a death-grip on this world.

Christian persecution is often subtle, not overt. I think we think that the persecution we’ll face one day will be someone pointing a gun to our head and demanding that we renounce our faith in Christ, or a rogue government seizing all our stuff because we’ve professed Jesus publically. While that can and has happened to some believers, I don’t think that’s what we will typically face. Persecution will more likely happen when something we believe as Jesus followers contradicts what people want or threatens their way of seeing the world. The tension will more likely be tripped when our faith leads them to something that challenges their way of life. The world will oppose us and label us and try to silence us. How do we respond effectively with love and grace?

Finally, when we respond to the changes in our culture with panic or alarmism, we contradict the Bible’s teaching about ordinary Christian discipleship. Part of discipleship’s curriculum is persecution. Even when we are persecuted, we are not called to play the victim. Think about the many

Jesus-followers whose stories you’ve heard when they faced intense persecution. Did any of them play the victim? Nope. We need to recognize the normalcy of persecution. It’s only when we have that mindset that we can be free from the fear of persecution and find victory in suffering with Christ.

We are called to be prepared for how we can follow Jesus even if it means social criticism or loss of privilege or financial penalty or criminal prosecution. Paul says in Romans that there is nothing negative we can face in this world that can hold a candle to the glory that our God has secured for us in eternity. Know that and hold on to that as you walk through whatever this world throws at you. 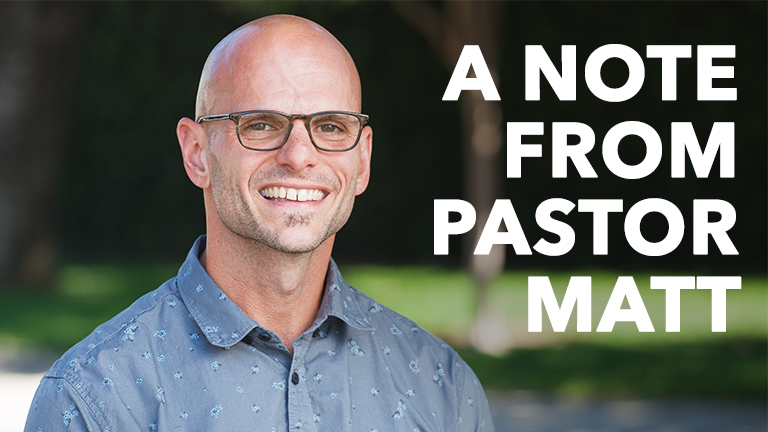 Anchor #4: Trust in God and remember that everything we have is by God’s grace. This month’s anchor is especially timely Read More

The last few months I’ve been sharing some anchors to help you engage the world around you. Hopefully you’ve been Read More

Who’s Next Update from Pastor Matt

Hey CrossPoint, Last May we began the process of making some necessary improvements on our campus–we called it our “Who’s Read More

Our weekly email newsletter is how we let you know what’s happening and what’s next at CrossPoint.