It’s our pleasure to introduce the 2023 Deacon Board Nominees!

These men have been found to uphold the biblical requirements for deacons. As part of the confirmation process, we ask you to prayerfully consider them. If you have any concerns, please meet with the individual to discuss them. If your concerns remain, please contact one of the pastoral staff for follow-up.

Owners of CrossPoint Community Church, age 14 and older, may vote at our annual business meeting during both morning services on November 27. 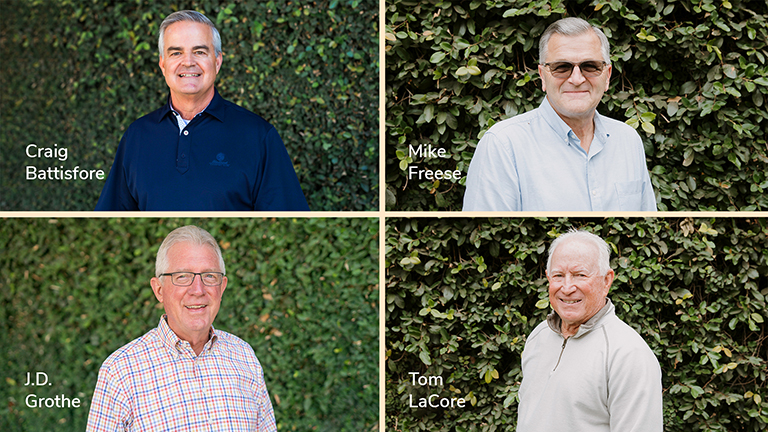 CRAIG BATTISFORE
Craig and his wife, Kris, have been married for 41 years. They have two children and four grandchildren. This will be Craig’s third term serving on the deacon board and he has been an owner of CrossPoint since 1985. Craig recently retired from Gallo Winery and is currently serving in Monday Night Community (and has been for 23 years). He is also helping lead a Man to Man men’s Bible study.

MIKE FREESE
Mike and his wife, Lois, met in the College Group here at CrossPoint. They have been married over 45 years and have three grown children along with 11 grandchildren. Mike is retired from Wonder Bread/Hostess Cake and distributing for Voortman Cookies. While at CrossPoint, Mike has been involved in the following ministries: college, children’s, home groups, peer groups, men’s, Chinquapin, and grandparent leadership. Mike’s hobbies include model railroading.

J.D. GROTHE
J.D. and his wife, Sandy, have been married for 53 years. They have two daughters and four grandchildren. J.D. is a retired architect. He and Sandy have been owners at CrossPoint since 1974. During that time, they taught new members classes, served in the young marrieds ministry, were on the high school ministry staff, acted as facilitators in the singles ministry, and led a number of home groups. J.D. enjoys traveling with Sandy, hunting birds with his dog, and gardening.

TOM LACORE
Tom has been involved with CrossPoint for 52 years, serving as a pastor prior to retiring where he focuses on disciple making. He has been married to his wife, Laurie, for 45 years. They have three children and four grandchildren. Tom has served with home groups, choir, children’s ministry, Monday Night Community, Ralston Tower, Redwood Family Center, and as a greeter on Sunday mornings. He enjoys spending time with his grandkids, golf, yard work, and helping others.